I wrote and refined this collection of reflections throughout my midlife passage, from my mid-30s through my early-50s, completing the project when I was 51 (1998).

A fundamental realization of full midlife is a sense of mortality that puts one’s life into existential perspective. For all of us, the midlife passage highlights a host of issues. It is in midlife that more sober reflection puts Self into a universal context and provides personal perspective.

I hope you will find these 51 great quotes and my reflections on them inspiring—well-considered counsel by a kindred spirit.

"Teaching the World to Die:  Unitarian Universalist Attitudes Regarding Death"

From their beginning, Unitarians have reformed American deathways. 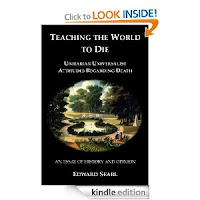 They significantly influenced, intellectually and practically, how the greater culture deals with the overarching reality of the human condition: mortality and death. The means of reform included antebellum innovations of the rural and garden cemeteries, late nineteenth century advocacy of cremation, a mid-twentieth century memorial society movement, and a long evolution of human-centered funeral and memorial services.

Unitarian innovations and reforms cited in this essay
As a consequence, there is a palpable Unitarian Universalist way for meeting death with humanity,  dignity, and meaning.

EdwardSearl, a Unitarian Universalist minister, is the author of the UU classic, In Memoriam: Modern Funeral and Memorial Services.

Ed Searl established The Royal Nonesuch Press in 1978 to print a chapbook collection of poetic meditations he wrote as minister of the First Unitarian Church of Youngstown, Ohio. Similar collections followed as he transitioned in 1983 from Youngstown to Hinsdale, Illinois,where he served through 2012. He is Minister Emeritus of the Unitarian Church of Hinsdale.

The Royal Nonesuch moniker references Mark Twain’s Huckleberry Finn, specifically the theatrical ruse of the Duke and the King.

In recent years, the RNP imprint has independently published Searl’s books through the on demand resources of Create Space and LuLu.

These works are available as soft cover books, downloads, and e-books.

The Royal Nonesuch Press uses the design and formatting services of Publishista ®.

Gannett House, a subsidiary of the Royal Nonesuch Press, publishes works pertinent to Unitarian Universalism. It is named for the distinguished Unitarian minister William Channing Gannett (1840-1923), author of "The House Beautiful." Its short works are available as Kindle ebooks.